Working with students on the Summer of Student Innovation is one of the best parts of my role at Jisc. It is great to hear the ideas that learners have to improve learning and make their life better in education.

This year we made a few changes to the competition. First to engaged more learners in FE and Skills by running separate competitions targeted at learners and apprentices, working with AELP to engage learning providers, as well as working with Jisc’s account managers and encouraging college staff to support teams from colleges to submit ideas. Secondly we made it an ideas only competition, so teams were no longer required to have the technical expertise to build their idea, but just to come up with a design. The aim was to engage more females and learners from non-technical backgrounds (but we always had a good subject spread).

At a recent meeting with the Learner Engagement working group for the FE and Skills collaboration we shared some numbers around this year’s Summer of Student Innovation that also showed how far we have progressed on achieving these targets of engaging more learners in FE and Skills and a more diverse group of learners.

This year we had ideas submitted from 80 teams compared with 38 last year. Over 12,600 votes were cast and 43 teams reached their voting target to be considered. In total 25 projects were funded, 9 student ideas, 10 learner ideas in FE, 2 apprentice led and 4 start-up projects. 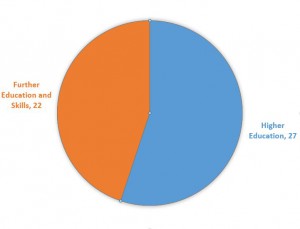 There were 22 ideas from FE and Skills compared with only two in the 2014 competition which represents an impressive increase in participation. The teams attended the four day design sprints alongside teams from universities; they completed the design tasks and pitched their ideas to a selection panel in August. The FE teams were accompanied by a member of staff from the college. The six ideas selected by the panel in August consisted of four ideas from colleges plus two ideas from apprentices under the apprentice competition.

Some people thought it was not fair to pitch FE teams against HE team and to also have them work together in the design sprints. However I think we can conclude that the teams from FE were more than capable of holding theor own and designing excellent solutions. We had already seen the Lingoflow team from Sussex Downs College deliver a successful product in the 2014 competition, so it was good to see teams with similar flair participating from colleges this year. 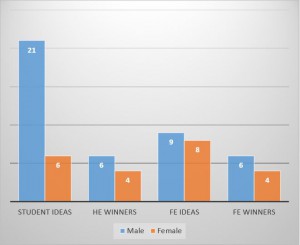 I also looked to see how the submission and success of ideas mapped to gender. As teams varied in size and gender mix (which was a positive) I decided to use the gender of the team lead as an indicator and only looked at ideas (45 in total). In 2014 the ideas submitted by females were 21% (8:30) where as in 2015 it was 33% (15:30). The balance was more even in learners ideas in the FE competition with 47% compared with 22% in the student ideas competition. In 2014 only 4 out of 20 of the winning teams were led by females, however in 2014 this had increased to 8 out of 20. 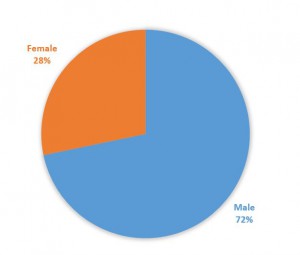 Attendance at design sprints by gender

Participation in the design sprints show a slightly different picture with 28% females to 72% males (around 100 people). The lead facilitators were females and we had an equal number of male and female mentors. This may be a result of some large all male teams attending the design sprints, but most of the other teams were of mixed gender.
The outcomes are positive. We have shown that good ideas can come from FE and Skills, they can compete with teams from universities and be winners. I was particularly enthused by the teams of apprentices that participated this year. We have always seen teams led by females being successful in the competitions so it is good to see this continuing to be the case and doing what we can to promote equality in the competition.

Since that start of the competition we have looked at the number of ideas submitted under various categories.

The balance of ideas across the categories has remained quite constant.Except for the second year we have seen an increase in the number of ideas around career progression and employability. The inclusion of apprentices in the competition may have been part of the reason but we are still seeing a growing need from learners for support around careers and employability i.e. finding a course and getting a job/apprenticeship.

Another observation was the large number of ideas in the student (HE) competition relating to student life. This is a broad category and does end up including all the ideas that are only just in scope. They were also the ideas that were less likely to reach the qualifying number of votes or be winners of the competition.

Next Year
We are currently planning the Summer of Student Competition for 2016 (yes there will be one). The aim is to continue to attract more quality ideas from across all learners. However we have also learned that our efforts are better focussed on support less ideas better. So the competition in 2016 will be looking to attract a lot more ideas from all learners. Expect it to be even more competitive, we want the best ideas, so start thinking about getting teams ready for the Summer of Student Innovation 2016.

We use cookies on our website to give you the most relevant experience by remembering your preferences and repeat visits. By clicking “Accept All”, you consent to the use of ALL the cookies. However, you may visit "Cookie Settings" to provide a controlled consent.
Cookie SettingsAccept All
Manage consent

This website uses cookies to improve your experience while you navigate through the website. Out of these, the cookies that are categorized as necessary are stored on your browser as they are essential for the working of basic functionalities of the website. We also use third-party cookies that help us analyze and understand how you use this website. These cookies will be stored in your browser only with your consent. You also have the option to opt-out of these cookies. But opting out of some of these cookies may affect your browsing experience.
Necessary Always Enabled
Necessary cookies are absolutely essential for the website to function properly. This category only includes cookies that ensures basic functionalities and security features of the website. These cookies do not store any personal information.
Non-necessary
Any cookies that may not be particularly necessary for the website to function and is used specifically to collect user personal data via analytics, ads, other embedded contents are termed as non-necessary cookies. It is mandatory to procure user consent prior to running these cookies on your website.
SAVE & ACCEPT